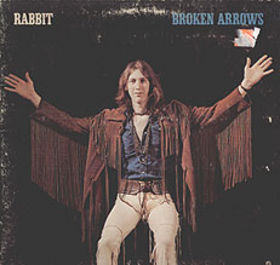 Recorded around the time of Free’s demise this, Rabbit’s first solo album, is a pleasant enough collection of country and bluegrass tinged singer/songwriter tracks which I’m surprised more people on here haven’t tracked down. Especially given his affiliation with bands like “Free” and “The Who”.

The album is pure seventies band member solo output, from the very first note you can gauge exactly when it was recorded. Hopefully some of you will know what I mean by that and not just all think I’ve gone a bit doolally-tap.

There are some pretty heavyweight (for the time) guests on the album, including former Free men Tetsu Yamauchi and Simon Kirke. Snuffy Walden, who deputised for Paul Kossoff in places on the Free album ‘Heartbreaker’ contributes some guitar work as does Junior and Pete Carr. As well as Kirke the drum stool was occupied by such as Jim Capaldi and Conrad Isadore. Reebop Kwaku Baah also turns out on a couple of tracks with his congas. Rabbit himself plays so many different instruments throughout the album to list them would be almost ridiculous.

The opening track on side two ‘Music Is The Answer’ was actually played live by Free during their final tour although on every bootleg I have it has been retitled ‘Intro ’73’. There is therefore the strong possibilty that it was originally written to be a Free track. ‘Blues My Guitar’ also has a very Free like feel to it.

As I have already said the album is pleasant enough but does sound very dated now. A lot of the songs have an unfinished feel about them as though they could have been developed into something more. The main problem as with most Rabbit releases are the vocals. His voice is definately an acquired taste and his Texan drawl is a problem on some tracks. However, on others it is a bonus. This is of course never more evident than on ‘Music Is The Answer’ this Rabbit sung version being hugely inferior to the Paul Rodgers sung Free version. Having said that though it is still the best song on the album. More proof if any was needed that I haven’t got a clue what I am on about for a great majority of the time !