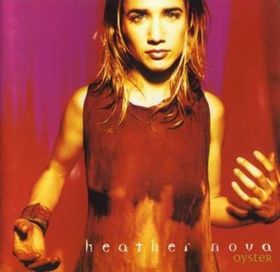 Released in October 1994 “Oyster” was Heather Nova’s second full length studio album and her fifth official release. The Heather Frith EP, released in 1990 before she changed her name to Nova a couple of years later, along with “Spirit In You” the first Nova EP, debut full length album “Glow Stars” and previous years live offering “Blow” had already gained her quite a following on the up and coming angst ridden female singer songwriter scene. “Glow Stars” in particular recieving rave reviews.

“Oyster” opens with ‘Walk This World’ a track which is all nineties acoustic driven power pop packed full of angst and pleading emotion as Nova begs the listener to ‘ …..come walk this world with me’ over a pleasing and catchy melody. The sexual innuendo on the constant moan of ‘want you to come ….. come’ and thrown in expletive is classic Nova. As is the almost poetically spoken lilt in the vocal of the verse with the contrasting lush melody of the chorus. ‘Heal’ is a great vehicle for her high vocal range and like most of her tracks has a great melody and feel. After a slow acoustic start the track builds up into something far more powerful. ‘Island’ is one of the most popular tracks on the album amongst hard core Nova fans and has a dreamy almost ethereal feel to it . Extended to over six minutes it has claims, along with two or three others, to be the album highlight. ‘Throwing Fire At The Sun’ starts with an almost tribal drum beat which remains throughout and as usual for a Nova track builds as it progresses and features some interesting and in places risque lyrics. Unusually though there is a pretty high profile guitar solo towards the end of the track. The following ‘Maybe An Angel’ is possibly,along with the opener, the best known track on the album and features a classic raspy breathy high pitched Nova vocal over a Lilith fair style of power pop musically. Think sexier Sarah McLachlan and you won’t be far wrong. An acoustic guitar and an almost spoken vocal provide the intro to ‘Sugar’ which is probably the most structured and adventurous track on the album. When Nova begins to sing the song properly it launches into a heavy muddy riff with frenetic pleading vocals. A song packed full of emotion and feeling for me it is the clear highlight of the album and is amongst the best tracks in her impressive catologue. The subject matter and the lyric may not sit easily with some but it is impossible not to be impressed with the delivery. As with the previous track it has the added bonus of a nice distorted guitar solo.

After the angst and power of ‘Sugar’ comes the more gentle mid paced pop of ‘Truth and Bone’. It features yet another one of those classic dreamy melodies that she is well known for and yet like most Nova compositions it still manages to include a little bit of edge in the vocal and the lyric. ‘Blue Black’ starts off as a slow track over a staccato riff and again displays her ability to flit effortlessly between angry power and wistful dreamy melody all within the space of one song. With lines like “Was it familiar when you touched my sister. God I don’t think there’s a word for that” she can never be accused of holding back on the lyric writing. She certainly isn’t afraid to say it like is and is happy to sail pretty close to the wind when necessary. ‘Walking Higher’ is a slower more gentle song and although it is probably one of the weakest on offer here it still displays Nova’s almost operatic tone to great effect. Another operatic wail launches us into ‘Light Years’ which is another pleasant mid tempo vehicle ideal for displaying Nova’s unique range and vocal style although it doesn’t quite capture the emotion and feeling of some of the bigger numbers in her repertoire. ‘Verona’ lulls you into the false sense of security of expecting some lightweight pop with its la la la intro but soon transforms itself into something far more substantial thanks to another one of her bittersweet cutting edge lyrics. The continued intervention of the light pop chorus gives the track a nice feel and her whispers of “I used to dream about Verona” over the top of the poppy la la la backing are a great contrast. As with a couple of the earlier tracks the electric guitar is more evident than usual and takes the song to a pleasing close. The album ends with another one of her trademark tracks. ‘Doubled Up’ has everything a Nova track needs with its thought provoking lyric over the top of a beautiful melody. The string arrangement which comes in during the middle part of the song lifts the song to an altogether higher plain and ensures the album ends on a beautiful feel good dreamy positive note despite all the angst and pain that has been evident in the lyrics of the earlier songs. It is close to a perfect album closer.

Despite the critical acclaim of her debut album “Glow Stars”, “Oyster” was really Heather Nova’s breakthrough album. Thanks mainly to her then burgeoning reputation and following on the touring circuit. She toured the album extensively for over two years. The singles ‘Walk This World’ and ‘Maybe An Angel’ also helped to higher her profile across the globe. Very much the foundation and blueprint for her next and to date best album “Siren”,  “Oyster” is a superb album from one of the most consistent and talented performers to come from the angst ridden female singer songwriter scene of the early to mid ninteies and is really an essential purchase for anyone with even a passing interest in that area of music.