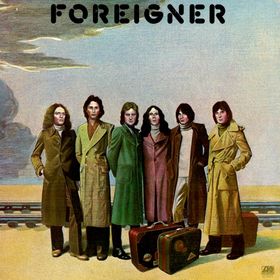 Foreigner were formed by ex-pat Brit rockers Mick Jones, Dennis Elliot and Ian McDonald and Americans Lou Gramm, Al Greenwood and Ed Gagliardi, hence the name. Their debut album hit the streets in March 1977 and was clearly aimed at the US FM radio market. It didn’t disappoint either reaching #4 on the US chart and boasting three top twenty singles. It didn’t fare so well in the UK with the only dent on the chart being an EP of the three US hits ‘Feels Like The First Time’, ‘Cold As Ice’ and ‘Long Long Way From Home’  which was released a year later in April 1978 and just scraped into the top 40.

Opening track ‘Feels Like The First Time’ is a good solid album opener with a catchy hook perfect for continued radio airplay. You could pretty much say the same about ‘Cold As Ice’ although it is in my opinion a slightly superior song. Both made the US top ten and  are instantly recognisable Foreigner classics. ‘Starrider is a lttle bit prog rock sounding and along with ‘Headknocker is the albums lowlight. Side One conludes with ‘The Damage Is Done’ which has a rather strange tempo. Side Two kicks off with the weakest of the three hits ‘Long Long Way From Home’ which in truth isn’t that spectacular. ‘Woman Oh Woman’ has the feel of a Beatles song. Lou Gramm delivers top notch performances on the following two cuts ‘At War With The World’ and, what is for me the standout track of the album, the superb ‘Fool For You Anyway’. ‘I Need You’ closes the album with some nice guitar work from Mick Jones.

‘Foreigner’ is a good solid album that in my opinion they never bettered. Some of the later albums were a little over produced and a bit too commercial. This was solid rock music with just the right amount of British steel and American shine.