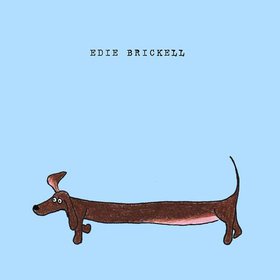 Like many others I was first introduced to the talents of Edie Brickell through the Windows 95 installation disc as the video for her track ‘Good Times’ was on it. Suitably impressed I bought the album and the back catalogue with The New Bohemians and waited patiently for the next release. Well it was a long wait. Almost a decade in fact before we got the excellent “Volcano” in 2003. Another long wait appeared on the cards but fortunately things have improved considerably in the last few years. As well as a new New Bohemians album we have had the Heavy Circles project and a new band The Gaddabouts which features Pino Palladino and Andy Fairweather-Low as well as Steve Gadd and Brickell. Also sandwiched in between those last two was this self titled ten track album so it would appear that she is attempting to make up for lost time.

“Edie Brickell” gets under way with ‘Give It Another Day’ a fast paced pop song with a particularly infectious melody. It is completely soaked in early seventies pop feeling as it bounces along. Within a minute your head will be nodding along and by the end you will be joining in the “doo doo’s”! The song itself reminds me of Lindsey de Paul.

‘Pill’ has a more staccato beat in the drums and bass but enjoys another one of Brickell’s great vocal melodies as well as one of her nicely crafted lyrics. Again the piano is very much to the fore and the pace is quite quick. As the song builds it becomes lighter, faster and more poppy. With a great hook the track is, like most of the album, very radio friendly.

Things get a bit rockier with ‘Been So Good’. In places this could pass for a full blown rock track. With a harder edged vocal it could easily pass for Sheryl Crow or the like. The contrast of the dirty riff, Brickell’s light and almost sweet sounding voice and the pop/rock arrangement work together perfectly. Throw in a rock like guitar solo and you have what for me is one of the standout tracks on the album.

‘Always’ is a much jazzier affair and makes good use of her ability to carry a melody without the need of instrumentation as the entire melody of the song is provided by the voice. The piano and drum playing a sort of jazz shuffle behind her which has no singable melody to it at all.

After four reasonably fast paced songs things slow down considerably for “2 O’clock In The Morning”. Again it has a slightly jazzy feel musically and the vocal melody is the highlight of the song and what lifts it out of the ordinary. Lyrically the track is wondering what would happen if a platonic friendship was to develop into something more. Personally with the way the song is arranged and the emphasis in the vocal I would have thought a title of ‘Natural Friends’ would have been far more suitable but that is really neither here nor there. The track ends with a nice instrumental passage.

‘On The Avenue’ starts with a ten second drum solo which leads into some jazzy and funky bass. The track has a really funky and jerky strut about it and the fresh instrumental passage at the mid way point is also a nice touch. As ever Brickell delivers a great vocal and melody. It is in total contrast to the next track ‘Waiting For Me’ which is almost a bluegrass meets skiffle meets country hoe down track. Some great guitar over a simple drum shuffle provides the back drop for a vocal which is classic Brickell and despite the frivolity of the whole thing it has claims to be one of the best on the album. The superb way in which she changes the key and tone at the end of the line “you’ll be waiting for a long time” is a pure audible delight.

The album ends with three far more serious grown up ‘album’ tracks that prove Brickell is not just some lightweight pop performer but a serious artist and songwriter with something to say. ‘You Come Back’ is the faster paced, lighter and more upbeat of the three and as with the majority of the album has a jazz like feel to it musically. At times there is a little too much going on beneath the vocal and her voice gets a little lost in the mix. The solo though has a clean cut freshness to it and as ever the vocal melody is out of the top drawer.

‘It Takes Love’ has a great dark brooding feel to it with some great mournful atmospheric piano. The vocal is bordering on the melancholy and shows her phrasing and timing to great effect. The natural Texan lilt of her accent also comes through and gives the song a nice natural authenticity. As with a few other tracks it has claims to be the album highlight.

The album ends with another of the highlights ‘Bad Way’. The wurlitzer, mellotron and strings giving the track a different dimension to anything else on the album. Brickell manages to flit effortlesly between the moody concern of the opening verse and the pleasant melody of the chorus and latter part of the song. Her phrasing which is always of the highest quality is so good here it deserves special mention.

Edie Brickell has long been one of the army of female singer songwriters that I like to wax lyrical about and in this self titled album she has delivered another set of superbly crafted songs full of catchy melodies, clever lyrics and good instrumentation. There is not a bad track on here and they all highlight her quirky, light, airy, easy to listen to voice. In fact this may just be her best album yet.